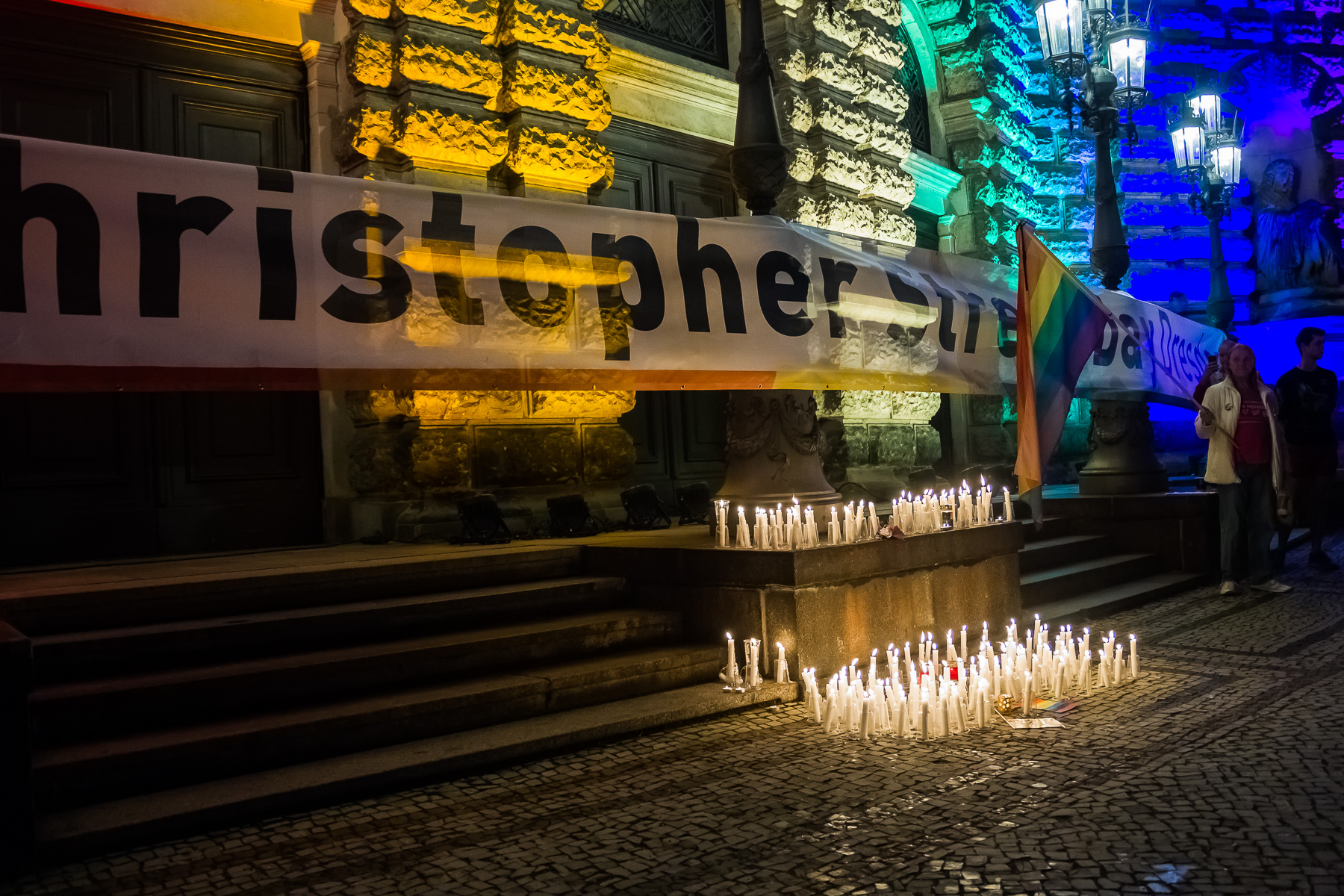 Vigil for the victims of Orlando

In the night from Wednesday to Thursday a vigil for the victims of Orlando was held in front of the Semper Opera in Dresden . For this, the facade of the Semperoper was illuminated in rainbow colors .The following speech was held . Followed by a minute’s silence

Speaking at the vigils and memorial services for the victims of the attack in Orlando Club Pulse.

We look today with great sadness and dismay to Orlando where a senseless and brutal attack took place, 49 people have lost their lives and injured. The victims of this cowardly crime have visited a club. They wanted to celebrate, flirting and dancing. They wanted to enjoy the freedom to be as appropriate to their sexual identity and orientation. In her cheerfulness a terrorist stepped inside  who denied this freedom, denied them this right to diversity, and 49 of them indiscriminately shot them.

It is hardly possible to find words for the hatred and brutality of this fanatical assassin. Great is the horror and great is the grief over this act that has taken innocent and defenseless people – and with which we are all meant that we are gay or lesbian, queer, bi, or trans inter *. The victims of the pulse in Orlando simply had the misfortune to be at the wrong time, wrong and yet right place: a club that represents joy of life and which has become for 49 of them a death trap.

Such fact can affect anyone of us. Terrorists know no boundaries, neither in space nor in their criminal procedure. That we had to learn painfully in the last few months and years. The terrorists of the so-called Islamic State want to destroy our open and pluralistic society. For them every goal and every means is justified.

Nevertheless, the target of this attack was certainly not happen to be a gay club by random. Although we still know too little about the background of this fact, as it shows a very clear but painfully: homophobia kills! This attack was aimed explicitly to a particular way of life. It is an attack on our community.

But the question is not whether it was an Islamist or a homophobic attack. Each act of violence of the so-called Islamic State or of those who rely on it is automatically a homophobic act Our community represents much of what Islamists fight:. The sexual freedom and an open society, the organized living together in diversity and endures. This is evidenced by acts like the in Orlando. But that is also reflected in the brutal murders of gay men being thrown on behalf of IS of skyscraper roofs – and we want to think the same way today.
The assassination of Orlando targeted for the first time in such a large and unimaginable scale victims of LGBTI community. Our thoughts and sympathy are with their families and all those who were close to them.

Dear folks of Orlando: Our hearts are full of sadness. Our thoughts are with you, with your families and friends. We suffer with you. Our solidarity is with you.

We send you our love. And we know, that hate will never win. Love is much stronger than hate and violence can ever be. Even such an brutal act can’t take your freedom, your joy of life, your passion, your hope and your love.

Everyone has the right to live and love as it corresponds to his / her sexual identity and orientation. This freedom can be the target of such a terrorist act in a brutal and merciless way. But he can not attack our freedom.

Freedom, equality, brotherhood and sisterhood, solidarity, human dignity and human rights are stronger than hatred, violence and lack of freedom there can ever be at the end. We must not forget at all anger at his actions. Hatred and exclusion can not be our response.

What has happened in Orlando, can also happen in Germany, also here in our city at any time. But this certainty should not prevent us from continuing to struggle with all the confidence that we have, for diversity and freedom and us opponents of diversity and freedom resolutely oppose to.

Fear is not a good counselor. Therefore let us continue courageously to be combative and determined to show the intellectual arsonists of any religious or political orientation in this country that they have no place with their hatred and exclusion in our society.

It is only a small step from words to deeds. Those agitating against minorities in his speeches who arises in public places or in the parliaments to the microphone, and makes fun of sexual orientation who calls heckling that homosexuals put into prison: The lay the foundation for such acts. And who is silent to all this, Mrs von Storch, Mrs Petry, Mr. Höcke or Mr. Gauland who distances himself thereof not clear and credible: the right to!

„Love is the only force that is capable of an enemy to turn into a friend“, Martin Luther King said. Hate leads to action as that which unites us here today in grief and solidarity.

I want to invite and ask, now in silence to commemorate the people who lost their lives in Orlando you therefore.

„At the end“, and the Martin Luther King said, „at the end we will not remember the words of our enemies but the silence of our friends.“